To the extent, if at all, that AmerCable Incorporated (“Nexans AmerCable”) is subject to the requirements of the California Transparency in Supply Chains Act of 2010 (the “Act”), Nexans AmerCable provides this disclosure statement concerning its efforts to eradicate slavery and human trafficking from its direct supply chain. Nexans AmerCable is part of the Nexans S.A. Group of Companies (“Nexans”).

Nexans Principles Nexans integrates Corporate Social Responsibility (CSR) in its strategy and respects the highest standards of business ethics and business conduct which are summarized in its Code of Ethics & Business Conduct. By adhering to the UN Global Compact, Nexans confirms its commitment to respect its fundamental principles in the areas of human rights, labor standards, the environment, fight against corruption and marks its determination of deploying improvement action plan to increase its performance in the field of sustainable development. Nexans has created a Supplier CSR Charter which attests to Nexans’ determination of promoting and sharing the application of CSR principles with its suppliers, with whom Nexans pursues to build a business relationship based on honesty, trust and mutual interest. Supplier Certification To the extent practical, Nexans AmerCable requests its suppliers to sign the Supplier CSR Charter and to take part in the Nexans CSR approach by committing themselves in a continuous improvement approach towards the principles listed in the Supplier CSR Charter. The Supplier CSR Charter establishes the principles that suppliers shall adhere to in their activities and at sites worldwide. 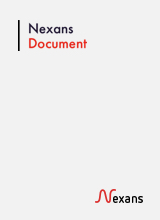